See our Page for all details of  Caribbean Catamaran Cruising >>>

Sail, Snorkel, Dine, Dance and Swim with the Turtles.
In this video we sail up the west coast of Barbados to swim with the turtles, and party aboard the Tiami Catamaran.

The adventure begins when the air-conditioned bus picks you up at your hotel and you drive along the south coast of Barbados to the Shallow Draft Harbour and the Tiami wharf.

Here we are welcomed aboard by Tiami’s captain and crew. You step onto a modern catamaran, specially designed to offer plenty of shade and lots of space to relax.

Soon we are settled down with coffee, croissants and banana bread. We motor off the wharf, turn into the wind, hoist the sails and are on our way. The crew are friendly, attentive and full of fun. We are invited to help pull up the sails; much more strenuous than it seems. Few volunteer, but there are a couple of sports on-board.

The first anchorage is at a ship wreck just past Sandy Lane hotel. You can put on a mask, and snorkel over the coral and the wreck, which is habitat to many colourful reef fish. The crew tosses some fish food into the sea, close to the boat, and a rainbow of movement splashes and darts through the water.

Next, we up anchor and sail to the turtles. They are beautiful and very friendly. Check out our next turtle video for full details.

We all settle around tables and on the deck. Wine, rum punch and draft beer are offered around. A lot of people are drinking juices, which is interesting. The juices are great. They do a mixture of pineapple, orange, Barbados cherry and all sorts of fruit blended together. Wonderful!

Jack from the Kiwanis, whom I met earlier at the hotel, clinks his glass and says quietly, “Do you remember the old days of the booze cruise? One never stopped drinking. It’s totally out of fashion now, isn’t it?”

Its true, not so long ago people over drank on these occasions, but, the world has changed, for the better, drinking is more moderate these days, especially if one has to drive. Also we are more conscious of health and the effects of excessive alcohol.

It’s a good crowd. They are friendly and full of fun. They have had just enough rum to loosen the tongue and get the hips swaying. Kiwanis Jack and his buddies are kicking up a storm, holding onto the pole for support as they shake a leg,.

The deck is alive with dance as we turn and fold the sail to head into the shallow draft harbour, and back to our place on the wharf with the Tiami fleet. 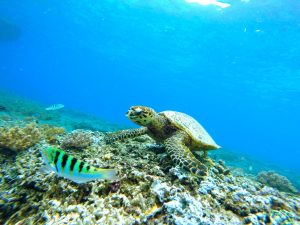 Imagine sailing the tranquil waters of the Caribbean Sea while watching a stunning tropical sunset. 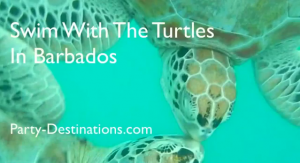 Swimming with the Turtles in Barbados – Kissing Turtles Tiami Catamaran Cruises Barbados Endangered Species The Green Sea Turtles hang out along the reefs off the west coast of Barbados. Not long ago they were considered a delicacy and harvested as food by local fishermen. Today all turtles in Barbados are protected. It is illegal to catch ... 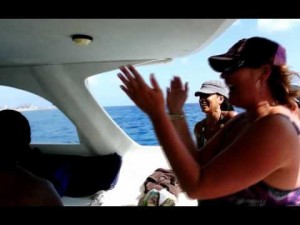 See our Page for all details of  Caribbean Catamaran Cruising >>> Sail, Snorkel, Dine, Dance and Swim with the Turtles. In this video we sail up the west coast of Barbados to swim with the turtles, and party aboard the Tiami Catamaran. The adventure begins when the air-conditioned bus picks you up at your hotel and you drive ...
cruising , party boats , party holidays , party sailing , sailing , turtles , urtles , video